Of all the orchard fruit trees it is apples that are by far the most popular. Part of this popularity is undoubtedly the keeping qualities of the fruit. With a little planning, you can have fruitful apple trees in your store from late July until April or even longer, so they represent a valuable fresh fruit source for much of the year. For this reason apples should represent the biggest percentage of your planting plan.

Apples are the hardiest of all the fruit trees so they are suited to most areas and localities. For very frosty or cold area’s it should be noted that cooking and culinary apples are generally hardier still than dessert.

As mentioned previously, the rootstock will control the height of the tree so you need to choose the correct rootstock for your specific requirements. The more dwarfing trees require better soil, the more vigorous/larger growing trees are usually more tolerant of poor soil. Listed in order of size, smallest first.

M27 Rootstock This is a superb miniature stock that is ideal for the very smallest garden and is also the rootstock of choice for container growing on the patio. Trees mature to a height of 160-180cm’s and the spread is the same, with the shape and habit of a true traditional apple tree, only much scaled down in size. The fruits produced are large and plentiful and precocious too, often yielding the first year. This rootstock can still yield at 20ibs or more per tree. M27 is also used for mini cordons and stepovers.

M9 Rootstock Is an excellent dwarfing rootstock, a step up from the M27 with a size approximately 240cm’s in height and spread. Crops of 30ibs or more per tree. Great for an intensive orchard, lawn planting, etc, or larger containers. Really does like good soil whereupon the results are superb. Often crops the first year, also the standard choice for cordon growing. 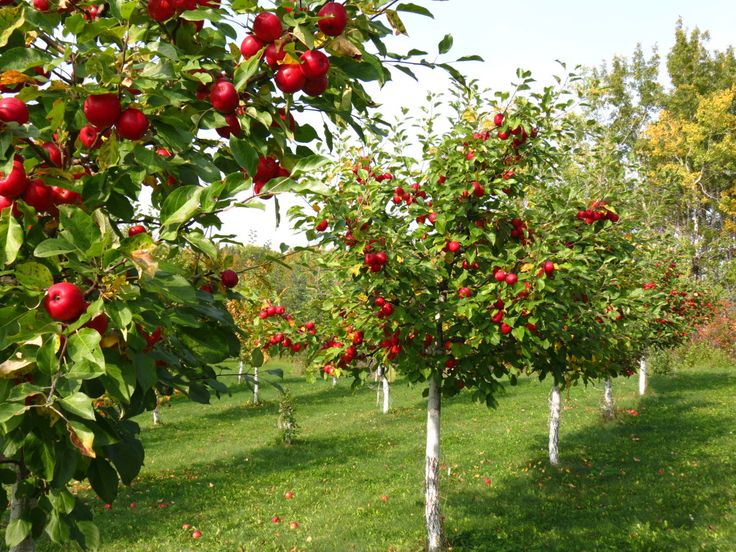 M26 Rootstock Is often described as semi-dwarfing but this does not mean it is a dwarfing tree, far from it, but it is a good intermediate choice with trees remaining easily managed with a height of 300-360cm’s and a spread the same. Heavily cropping when established and good on lighter soils.

Rootstock MM106 Can be used to make a half standard tree with a trunk clearance of 120cm’s so good for grassy areas that need to be mown beneath. Ideal as an orchard tree with heavy crops in excess of 50ibs per tree when mature. Tolerant of indifferent soils. Height 400cm’s plus, spread the same. Good for espalier or fan training.

Rootstock M111 More vigorous still than MM106 and good on poor soils but not quick to come into bearing.

Rootstock M25 Too vigorous for general applications but suitable for those who want an apple tree as big as you’re average house! Slow to reach fruiting maturity but makes a hardy tree.

There are actually a great many more rootstocks for apples in existence but these are the ones you will most commonly be presented with an offers a good assortment of tree sizes suited to all purposes and applications.

With such enormous variety it is difficult to make suggestions as to ‘good’ varieties so for easier reference these have been subdivided into categories and types.

‘Early’ are those that ripen from the end of July and into September, representing a valuable season extending yield before the main apple times begin.

Beauty of Bath Apple Trees is an old variety that has been enjoyed for hundreds of years. It has a juicy, refreshing flavour and is amongst the very earliest to ripen, in late July and early August. Eat straight from the tree for the best flavour.

Discovery Apple Trees Hardly needing introduction, being one of the ‘famous names’ in apple growing history. Season is throughout August, excellent taste.

Katy Apple Trees Slightly later and usually ready from mid-late August, you will sometimes see this variety listed under the originators name which is ‘Katja’ It comes from northern Europe and is really food for colder, frosty area’s. The fruits are heavily flushed red, and most attractive.

Redsleeves Apple Trees Redsleeves is unusual in that is keeps quite well, which the earlies often don’t. It’s only a small to medium sized tree but has a lovely sweet taste and is a vivid red flushed apple, great for lunchboxes or snacking. The tree is naturally compact and heavy yielding. Self fertile so can be grown on it’s own. Good for organic growing as it is very disease resistant, and also deserves mention because it is self fertile – good for the one tree garden. Pictured below. 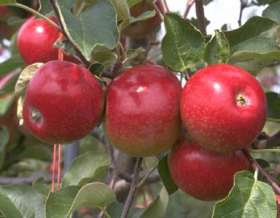 This is where the bulk of the varieties are and it’s difficult to choose recommendations as there are so many but after much deliberation, these make our shortlist. Season is mostly October to Christmas.

Gavin Apple Trees Although never a mainstay surely deserves wider appeal. It has natural scab and disease resistance and always seems to do well. The orange flushed fruits have a really good well balanced flavour.

Red Falstaff Apple Trees A newcomer that has quickly leapt onto the bestseller lists. Handily self fertile so you don’t need other trees to go with it, Red Falstaff has branches that can literally be weighed down with the profusion of it’s fruits. Excellent dense, crispy texture and a sweet flavour. Top class variety which should be considered as part of any fruit tree planting programme.

Charles Ross Apple Trees Often described as being like a big Cox’s. Charles Ross is suitable even for northern locations and has a sumptuous taste.

Greensleeves Apple Trees One of the best performing varieties each season. Greensleeves is self-pollinating and very heavily cropping. The fruits have a refreshing, juicy but not too tart flavour. Very easy to grow so good for beginners.

Spartan Apple Trees A very heavy cropping and easy to grow variety suited to all area’s. Fruits are almost entirely a stunning dark mahogany red and have a very sweet taste which often features on popularity polls. One of the best of all varieties.

Saturn Apple Trees Good for organic growing as it is very disease resistant, and also deserves mention because it is self fertile – good for the one tree garden. Pictured below. 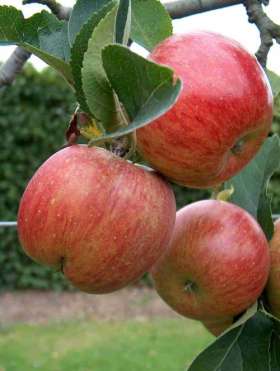 At the tail end of the season it’s good to have these varieties that go on well after most others, providing good quality fruits from your shed, garage, or ‘fridge well into Springtime.

Winston Apple Trees Popular on the Continent and seems to do well everywhere, the smallish fruits are hood for lunchboxes and have a good, mildly sweet taste. Easy to grow variety.

For those who like their apples with a bit of crunch! 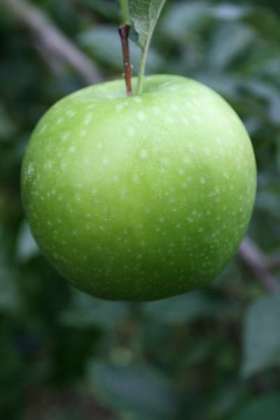 The characteristic ‘nutty’ and often aromatic taste of a russet has endeared them to many. Here are some good ones: 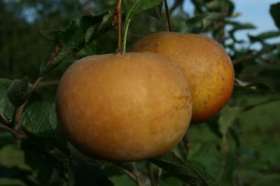 If Cox’s is your favourite apple but you don’t fancy mollycoddling and worreting over a Cox then here’s some excellent similar tasting varieties that won’t give you sleepless nights. 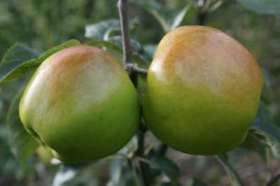 Apple Sawfly Easily identified as a brown ribbon-like spiral mark on the surface of the lower end of the fruits. This is caused by the sawfly larvae burrowing into the fruits to feed on the tissue just beneath the skin. Natural control can be effective – remove fallen fruits that show the symptoms promptly and destroy them, the developing larvae should still be inside. However some may have already left to pupate in the ground beneath the tree so by covering the soil with a plastic sheet will prevent this happening. Chemical solutions can be effective – pyrethrum applied as the flower petals are falling, and again 7-10 days later will work but timing is critical.

Codling Moth Often presents little sign outwardly but the small white grubs will become apparent inside the fruit when it is cut. You may then notice a small purple-brown hole where the larvae entered the fruit. Control can be by chemical means [pyrethrum] or natural – codling moth traps can be applied during June and July when the adults are active.

Aphids/Greenfly The most common problem of apple trees and appears under several guises – rosy apple aphid, greenfly, whitefly and woolly aphid can all settle and make colonies. Biological controls are available or you can spray light infestations on small trees with soapy water which will often rid them. But heavier or larger infestations really need treating with a systemic insecticide such as Provado. Woolly aphid inm particular seems difficult to eradicate without a systemic insecticide.

Apple Scab The most prevalent fungal disease after mildew is apple scab. Symptoms are present on leaf and fruit; black-brown spots become bigger and bigger and can create whole patches that eat away at the leaf and discolour the fruits badly. Scab is more prevalent in wet area’s or during rainy seasons. Control by spraying can be sought by using sulphur or copper based fungicides. It has also been suggested that seaweed extract such as Maxicrop, applied as a foliar feed, has some effect. Encouraging healthy vigorous growth will help in avoiding scab and there are also some varieties that are largely resistant, such as Charles Ross, Gavin and Saturn.

Powdery Mildew Is a common problem and presents itself as a silvery dusting on the new leaves. It can be controlled with the use of a broad-spectrum fungicide but prevention is better than cure so if you have experienced this problem before start to spray at intervals early on in the season, soon after the leaves have opened.

Bitter Pit A physiological disorder which cases brown speckling within the fruit, usually not apparent until you cut it. Such fruits are normally unusuable for most general purposes. It is caused by a lack of calcium in the soil, or a trees inability to extract calcium from the soil caysed by dry conditions. To counteract this you can use a foliar spray of calcium chloride, applied during the summer months.

Canker A common disease of Apples & Pears is Canker which causes distinctive lesions on the trunk and branches themselves, these develop into sunken, flaking wounds. The disease is more troublesome in the wetter area’s of the country. The best course of action is to cut out infected wood, beyond the point of infection leaving only clean growth. If the canker is on the main trunk or a major limb then spraying with bordeaux mixture can help. Some varieties are more susceptable to canker than others.