We despatch all year round, usually within 3-5 working days of receipt. Plants are in containers.

When mature 10-20ibs’ depending on variety is normal. A space of not less than 72” x 48” is required, a little less for compact growers such as Loch Ness Blackberry Bush or Waldo Blackberry Bush. 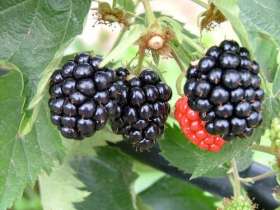 If as a child, you were subject to the joys of ‘brambling’ – picking blackberries from the hedgerows then you would be used to the odd prickle or scratch being a consequence of harvesting those delicious berries. But for those who led a less rural upbringing I can imagine the horror at the thought of a bit of blood-letting involved in the seemingly simple task of picking a few blackberries! So, these days, whilst there is a call for thorny varieties of blackberry, it is those with innocently harmless smooth-as-silk-stocking stems and canes that are definitely the most popular. And, when it comes to variety choice, the most common question is “which are the thornless ones?”

Is happily, just the same, and just as easy, as their more boisterous prickly relatives. Although in the main, growth is a little easier to tame and less rampant, they remain hardy and pretty easy on most ordinary soils. The sweeter berries will come with a good dose of sunshine but the plants are well able to grow in partial shade too and crops aer still worthwhile.

There are some compact varieties for those short on space, and also the odd one that has retained a good deal of vigour despite being without fearsome armoury but most lie within the boundaries of the two. A spacing therefore of about 8’ is appropriate for most varieties but you could get away with 4-6’ for the smaller kinds. In all cases support is a benefit as it makes the canes much easier to maintain, and, importantly, to harvest. Without support the canes tend to arch down to the ground and this makes picking the berries very difficult, and also means they are more likely to get muddied when it rains.

Unless you are growing against a wall, two posts inserted into the ground either side of the plant, and two rubber-coated wires attached and stretched across is the easiest means of support. Less vigorous varieties can also be simply tied to one stout pillar or post but here the potential for yield will be reduced because you will be limited on the amount of new fruit-bearing growths you can accommodate.

Remember to cut out all the old growths after fruiting and tie the new growths in – these will carry next years crop. If you keep leaving the old growth intact it will eventually die and lead to a congested, messy crown and the plants’ ability to produce that promising new growth is impaired.

Compact growers – Loch Ness, Waldo, and to a lesser extent, Loch Tay are good conservative growers that are happy with a spacing of 4-6’. The first two varieties may also be grown as self-supporting if need be as the stems are shorter and almost shrubby.

Intermediate growers – My own preference is for Merton Thornless Blackberry Bush. It’s an oldie but the flavour ranks amongst the finest of all and it remains a good yielder. The very early ‘Helen Blackberry Bush’ and later ‘Chester Blackberry Bush’ are also highly recommended; these newer varieties crop very heavily and the quality of the berries is superb. Adrienne Blackberry Bush is also well worth mentioning.

More vigorous varieties – Smoothstem and Thornfree have a good deal of vigour and excellent cropping potential so if you can afford a good 10-12’ run then these will make a very productive addition to your fruit garden.

Is the Flavour as Good as the Prickly Kind?

Another oft-asked question and being brutally honest, no. Even the best flavoured thornless Blackberries don’t quite have that aromatic sweetness associated with the true wild blackberry. But worry not as in the main they still compare very favourably with commercially grown shop-bought blackberries so if that’s what you are used to then you certainly won’t be disappointed with any of the varieties we offer. But if you are a true connoisseur of flavour and want only the very best tasting blackberries then grow a variety like Ashton Cross Blackberry Bush – and invest in a pair of gloves!