Buying Raspberry canes from a specialist source, and making sure they are well treated to get the most vigorous and happy canes, will encourage some natural defence against these enemies, and problems will be much less common. But even the perfect row of raspberries will suffer from something sooner or later, often these are fairly minor diseases that can be tolerated, occasionally things get more serious. Either way here is a checklist of the most likely causes of any problems you may experience.

APHIDS aka Greenfly will cause distorted and curled new leaf growths. Light infestations may not cause too much of a problem but heavier infestations weaken the canes and compromise cropping production. Either scenario should not be tolerated because greenfly spread viruses and other diseases so it’s a good idea to eradicate them. Soapy water can be used on small colonies and modest planting area’s, otherwise opt for a good insecticide. 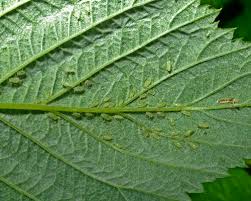 VIRUSES can be identified by stunted canes and leaves which are mottled or streaked, usually yellow. Unfortunately there is no cure so all canes should be dug up and burnt. Replanting should occur as far away as possible to prevent the disease spreading to them. If this is not possible and you have to re-plant in the same spot then remove the soil to 2 spits depth replacing it with uninfected soil. You can, as an alternative treat the existing soil with jeyes fluid [as per instructions for soil sterilization on the back of the can] but you will then need to leave the area fallow for 6 months preferably before planting the new canes. Some varieties are less prone to virus than others, but there are none that can truly be described as virus resistant.
Virus is relatively uncommon and some deficiencies can give similar symptoms so check first or apply fertilizer rich in magnesium and trace elements before assuming the worst. 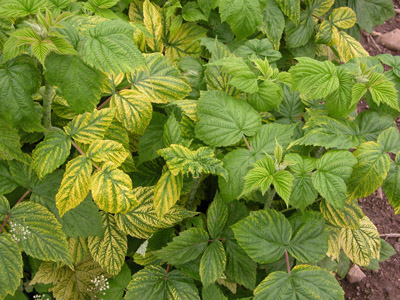 PHYTOPHTHORA raspberry root rot. More of a problem on heavier soils but not exclusively so. Some varieties are more susceptible than others. Symptoms are that the canes die from the base up, upon lifting the roots beneath have deteriorated and simply rotted away. The disease is spread by water and is becoming an increasing problem amongst commercial plantations, and now it is appearing in private gardens too. There are some fungicides that can treat the problem but these are only currently available to commercial growers and not authorised for use in gardens. The only course of action is to follow the re-plant instructions as for virus above and choose a resistant variety of which there is a limited range – Cascade Delight and Glen Ericht being prime examples.

SPUR BLIGHT is identified by the withering of the new canes as they appear in spring; purple blotches can be seen on shoots and stems. Infected canes should be dug out and destroyed, and remaining growth sprayed with benomyl or a good currently available alternative.

RASPBERRY BEETLE Is the culprit when you have grubs in the fruits themselves. It is quite easily eradicated on a season-by-season basis but timing is crucial. A good systemic insecticide will work but it should be applied at fruit set, and again just as the first berries begin to show some colour.
In all cases of insect infestation Provado is our recommendation. It is readily available from stores and online and it is systemic. This means that whilst it does kill on contact, it is also absorbed by the plant so it works from within, ensuring protection for up to 6 weeks.