Correct pruning, of raspberry canes at the right time, is essential to providing good crops of raspberries, and summer fruiting [floricane] varieties require pruning at a different time to autumn fruiting [primocane] varieties, although the method is just the same.
After planting your new canes should be cut right back to just an inch or two from the ground. This might seem drastic but is prevents the cane you have planted from flowering and fruiting, which is important because you don’t want the new plants wasting energy producing a crop the first season and it isn’t worth risking a lack of impetus for the next season, especially as the first summer, even if you did let them crop, the harvest would be farely sparse. So cut those canes right back and let the new growths come through – these will emerge from the base of the cane and also from the roots themselves below ground. These new canes will grow up during the first growing season and provide a good established raspberry bed which will then yield well the next season. The pruning after planting should be the same for autumn and summer fruiting canes. But thereafter they should be treated a little differently. 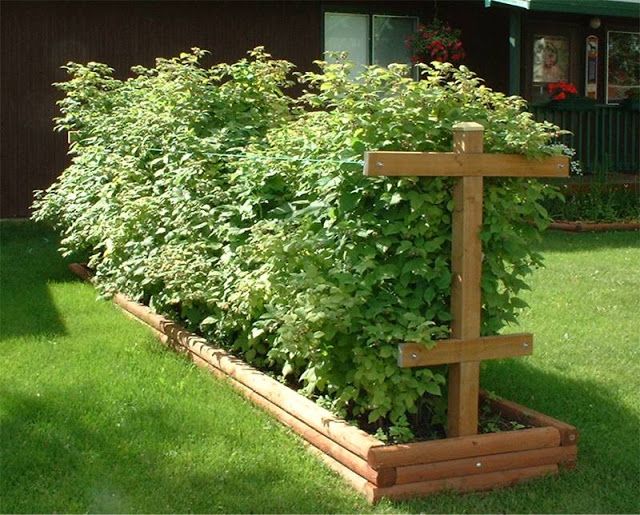 In subsequent years, for the summer fruiting varieties, you should go through the rows and cut out all those ‘old’ canes that have fruited that year; this should be done in late summer or early autumn. Cut them right out, clean, at the base. Leave the burgeoning new canes as these will carry the crop for next summer. So you will see you are aiming for a bi-annual cropping system where canes are cropped for one season and removed to allow the new ones to crop the next – and so on. If you don’t do this and continually leave the old canes then the rows will become too congested and the dead wood of the these old canes [which will die off anyway] will inhibit the production and growth of the new ones and your crops will gradually decline.
For Autumn fruiting varieties you prune later; leave them alone until February and then simply remove all growth that is there. These varieties fruit on the same seasons new growth so the new shoots that emerge that spring, just a few weeks after you have removed all the growth, will grow forth and fruit later that same year.
When the raspberry bed is fully established you may find with some of the vigorous growing varieties that there are simply too many new canes and that the rows are becoming congested. New canes may also appear from underground a surprising distance away from the main planting area. Each year evaluate the new growth that has appeared and don’t be afraid to remove any unwanted new growths. This is best done fairly early in the growing season and they can usually be pulled out of the ground quite easily. Repeat later in the summer if necessary.
When pruning, always make sure your secateurs are well sharpened, to prevent strain on your arm and hands, and to ensure nice clean cuts.

It might seem an arduous task but your raspberries really do need supporting and tieing in; most varieties will grow 6-8’ tall, and in windy weather they will get blown about and some canes will fall into the rows making a very messy bed, which will become difficult to maintain and harvest. Sometimes during stormy weather even the fruits themselves may get blown off and this is much less likely with a good support system in place.
The most popular and convenient method is the single fence system. Drive 7’ hardwood posts into the ground, at least 18” deep into the soil. These should be spaced at around 12’ [360cm] intervals. Stretch galvanized 14 gauge wire between the posts, at two heights – 3’ [90cm’s] from the ground, and again at 5’ [150cm] from the ground. If you can obtain rubber coated wire then so much the better, for it prevents the canes from rubbing and becoming damaged, on the wire. This simple structure provides a good basic framework in which you can tie in all the canes and prevent wind damage and will provide a nice neat and orderly row of raspberries! 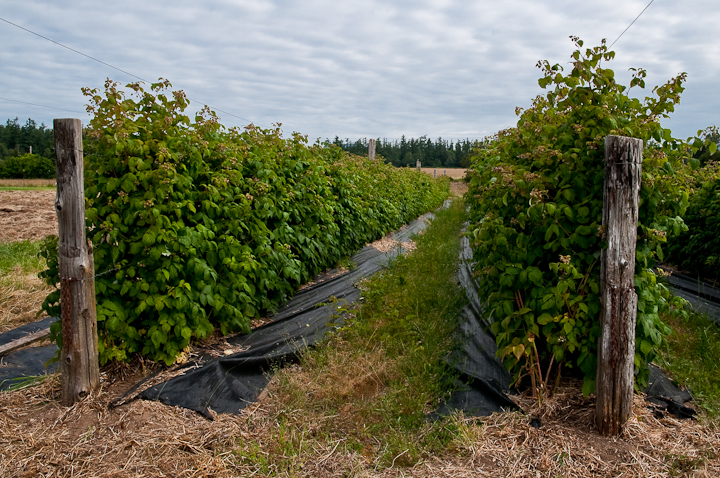 If your planting scheme is a little less adventurous and maybe you only have a very short row of canes, or you only have room for individual canes or small groups of canes planted at intervals through the garden for example, you can support individual canes with a single post driven into the ground as described, and this one cane, together with the multiple new growths that will appear when established, can simply tied into the one post.

The best fertilizer for established canes is sulphate of potash which can be applied in January or February, at about 1 oz per square yeard. You can follow this up with sulphate of ammonia in March applied at about half the rate of of potash. Other feeds that are more than satisfactory include growmore and bonemeal. Apply ferlizers so that they cover about 18” either side of the row and rake in lightly.
It is a worthwhile practice to mulch the beds in late March. This conservation of moisture results in more, larger and juicier berries and also prevents weeds from coming through and seeding so a little extra wotk spent in late March may save quite a lot of time weeding later on. Don’t pile the mulch up around the actual canes but apply around the canes themselves, keeping the immediate area around the canes clear. Any organic rich material will suffice be it grass clippings, compost or composted bark.
Additional watering brings rich dividends; during the summer when the canes are fruiting it will prolong the season and also results in greater crops of better quality fruits. But you should also think about irrigation during the spring if it is dry, as it often is. This is the key time of growth when flower production is already being initiated and the new growths are starting to come through for next seasons crop. Providing extra water at this period insures your crop not only for that summer but also the next. Extensive plantings will benefit from a hose nearby so that water can be applied easily and liberally. More extensive plantings can best be serviced from a static leaky hose watering system laid along each row, and this will make the process much less arduous.