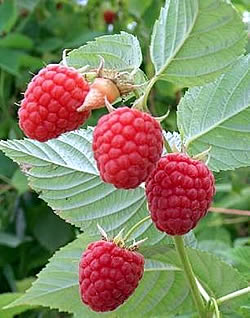 I get asked about planting raspberries in pots a lot and most if not all soft fruits will do well as container grown specimens as long as a few simple rules are observed. Most soft fruits that is, except Raspberries!
I’ve seen a few glossy photo’s of lush-looking raspberries growing in pots and laden with fruit. Many of them are staged I feel because the reality is rather different. Raspberries just do not seem to like long term cultivation in containers of any kind and they’re natural growth tendencies does not really suit such a practice. Because, as described previously, abundant crops are dependant on lots of healthy new cane production each season, and this key fundamental is compromised by container growing. It’s very hard to keep them multiplying lustily in such an environment. You might find you get goodish crops the first season, from the existing canes you planted. You might get a few the year after that but then that’s usually it. Plus they are really too tall and ungainly for an average pot.
If you want to give it a go then it could provide a bit of fun but don’t expect the world and only view it as a short term project. Plant the canes out into the garden after the first season to grow properly.
For those who want to try it go for a container not less than 10 litre capacity, not too deep because raspberries are shallow rooted and the bottom third of the pot will probably remain unused. Use a good free draining proprietary compost with some added grit to ensure that drainage remains really good. Such a container will house 3 canes. Provide support for the growing canes with some 5’ bamboo canes – tie them together at the top to make a wigwam effect. This will stop the canes from blowing about, and make sure the whole is situated in a sheltered position because as it will get quite top heavy later in the summer it will be very prone to falling over in the slightest breeze,.
Water well, every day if necessary, and provide additional feed with maxicrop seaweed extract once flowering and fruit set begins.
The best ones to try in pots would be Malling Jewel, Autumn Bliss and Zeva as these are a little less tall and are quite easy to grow varieties.

Now comes the exciting part. You have digested all the advice given, you know where you’re going to put them, you have the ground prepared, secateurs are primed and the freezer and jam pots emptied in anticipation! Giving some thought and research into the best varieties with the qualities you value is important to ensure you get the most out of your endeavours and is one of the most important aspects to consider.

If you haven’t grown raspberries before then you should be warned that most varieties have a few prickles. Not really bayonet-style thorns as such, and more of an inconvenience than a downright hazard but they can make harvesting uncomfortable especially if you’re allergic to the odd scratch! I think it should be viewed as a minor annoyance necessary to experience the joyes of freshly picked raspberries grown by your own hand! But if you really don’t fancy the idea of getting scratched then you will be pleased to read that recently a host of newer varieties have emerged that are handily without thorns and have canes as smooth as sheer silk stockings! 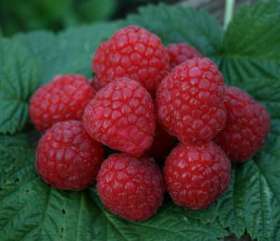 The most popular of these is Glen Ample Raspberry Bushes – actually our top selling variety. It is a scond early variety that demands good soil conditions to give of it’s best but when it’s good it’s superb. The berries are really large and it is a very heavy cropper. Definitely one to grow unless you have rotten or heavy soil.
Glen Moy Raspberry Bushes is another such spine-free raspberry cane and it is a true early variety. For many years the heaviest yielding type in it’s class, Glen Moy remains at the forefront of commercial and domestic planting.
Glen Lyon Raspberry Bushes is another very noteable variety with no prickles, in the mid season class. Glen Prosen Raspberry Bushes is another Raspberry Bush to consider.
The novelty of thornless raspberries was until recently the preserve of the maincrop varieties. But now one or two autumn fruiting types are also being introduced that have no prickles. Joan Squire was the first of these but has been quickly followed by Himbo Top which is a stunner with it’s huge berries, and also Autumn Treasure, another with very big fruits and a long season. No doubt more will follow as breeding programmes concentrate ever more on the quality of nice smooth and shiny growths.

If you don’t fancy the idea of erecting post and wires to keep your raspberry canes as straight as a row of soldiers, or it space simply doesn’t permit, then here are some handily shorter varieties that will generally succeed well with nothing to tie them to. It’s a good idea to select the most sheltered aspect to grow them in.
Malling Jewel Raspberry Bushes, Zeva, Autumn Bliss, September and Malling Promise Raspberry Bushes are good examples of short growing varieties, often no more than 4-5’ in height when grown.

Not to be confused with Autumn fruiting Raspberries, these follow on from the mid season period, filling the gap between the two with fruits ripe the second half of July and well into August. Octavia Raspberry Bushes is my pick of the best and is a variety sure to please with it’s plump rosy berries, excellent flavour and enviable cropping capabilities. Glen Magna Raspberry Bushes and Tulameen Raspberry Bushes are very popular and Leo plus Malling Admiral Raspberry Bushes are old strandbies that continue to hold their place.

Older favourites have been complimented by new introductions with longer season and heavier yields. Of these Himbo Top and Autumn Treasure come highly recommended but it is Autumn Bliss Raspberry Bushes that remains the most popular ‘famous name’ in Autumn fruiting raspberries and this one still does well. If you like to look at quite old varieties – and these often have the very best flavour – then the aptly named ‘September plus Zeva, Sceptre and Heritage are well worth considering. The latter 4 are also the hardiest growers in this section.

Of course we all know raspberries as being red, don’t we! It might come as a surprise to the less initiated that raspberries can also be yellow-apricot, deep purple and almost black, too! These exciting varieties bring a welcome dash of diversity to the raspberry planting programme and for those that dare to be different provide an exciting flavour variation too.
The most well known of these would undoubtedly be the yellow or golden raspberries – the fruits of which really ripen to a sort of apricot colour. Briefly they were coveted by a well known high street grocery chain who had them cultivated on a commercial basis, hut the fruit is too crumbly and does not travel very well so the idea didn’t last very long. But that doesn’t stop you, the home gardener from enjoying them, where this quality doesn’t matter so much. The flavour is much sweeter than traditional ‘red’ raspberries, with little acidity. So if you like your fresh fruits to have the sweetest possible taste, or don’t like to use too much sugar then these are a great bet. Although primarily used for dessert, they also make a very pretty coloured jam. Maincrop and autumn fruiting varieties exist – Golden Everest Raspberry Bushes, or the very old antique Yellow Antwerp are main season croppers. Fallgold Raspberry Bushes, Valentine and Kiwi Gold Raspberry Bushes fruit from September to October. Grow them in just the same way as normal raspberries.
Purple Raspberry Bushs are very exclusive and you won’t see them very often. The habit is a little different, almost shrubby and you wouldn’t prune them as much as normal raspberry canes. The fruits are fairly small but ripen to a dramatic dark purple. The flavour is quite powerful – you can eat them fresh but probably at their best added to yogurts or made into jams and pies where the full-on flavour really comes through. Glencoe is the only variety grown in this country but others are cultivated abroad such as ‘Royalty’

Finally the Black Raspberry, surely the most coveted and rare of all. The fruits are quite conical, ripening in July, their colour is an astonishing velvety near-black, the taste is out of this world – ambrosial, complex, sweet and aromatic. They suit all purposes and even the canes themselves are different, covered in a kind of silvery ‘bloom’ which makes them quite attractive to grow in the shrub border perhaps. Black Raspberries tend to have a clump forming habit that spreads only slowly; pruning should consist of thinning out congested clumps in later years with the removal of old stems from the base.
So here we are – the world of raspberries explained! I hope this gives you sufficient advice, help and information – not to mention inspiration – to gain the very best of the Queen of soft fruits – she may not be the absolutely easiest to cater for but is well worth a little extra effort!