To prepare the area double dig it over first if it hasn’t been cultivated properly before. Remove all weeds and for preference apply a compost mulch to 2” across the planting area. This isn’t a necessity but will improve results and get the bushes going more quickly. A dressing of 2oz’s bonemeal or growmore, and 0.5oz’s of potash should be applied and raked well in.
You should allow 5’ between bushes and it will make things easier if you mark the planting positions with pea sticks before you plant.

The best time to transplant is from October to late March and during this period the bushes will be supplied to you as ‘bare root’ so they won’t be in a pot or container but simply lifted from the Nursery field and supplied bare rooted with a bag around the roots to prevent them drying out. This point is key as at no time should the roots be exposed to drying air, wind or sun. Keep the bag on the roots and keep the bundle in a shed or garage, somewhere cool until you are ready to plant. Immerse the roots in a bucket of water for an hour or two and then replace the bag, sealing tightly, if need be.
Dig a hole large enough to take the roots properly. Probably the root system will be smaller than an average blackcurrant for example. Make sure the planting depth is the same as it was on the nursery [identifiable by the soil mark around the base of the stem] or if you can’t see properly how deep the bushes were planted before, just make sure the uppermost roots are covered by about 2” of soil. Avoid planting too deeply or too fleet. If you plant too deeply it can delay the onset of cropping, too fleet and the bush risks being windrocked in the soil and may loosen and it may also dry out.
Staking is not necessary for Gooseberries grown as bushes. Water them lightly in to settle the soil around the toors and make sure they are well firmed so there are no air pockets around the roots beneath the soil.

If you are planting during the summer months your Gooseberry bushes will invariably be supplied in containers as it isn’t the right time for bare rooted stock then. This is a convenient way of transplanting during the better weather, or maybe you just weren’t ready in the Autumn and winter. Planting tips are the same but heavy and regular watering will be necessary until the new bushes are established. Although establishment is usually quite quick they will need watering for 4-6 weeks after planting anyway and keep an eye on them after that, if they bwilt or show signs of stress continue to water.
The morning and evening are the best times to water and puddle it in direct to the roots with a hose or watering can minus the sprinkler. 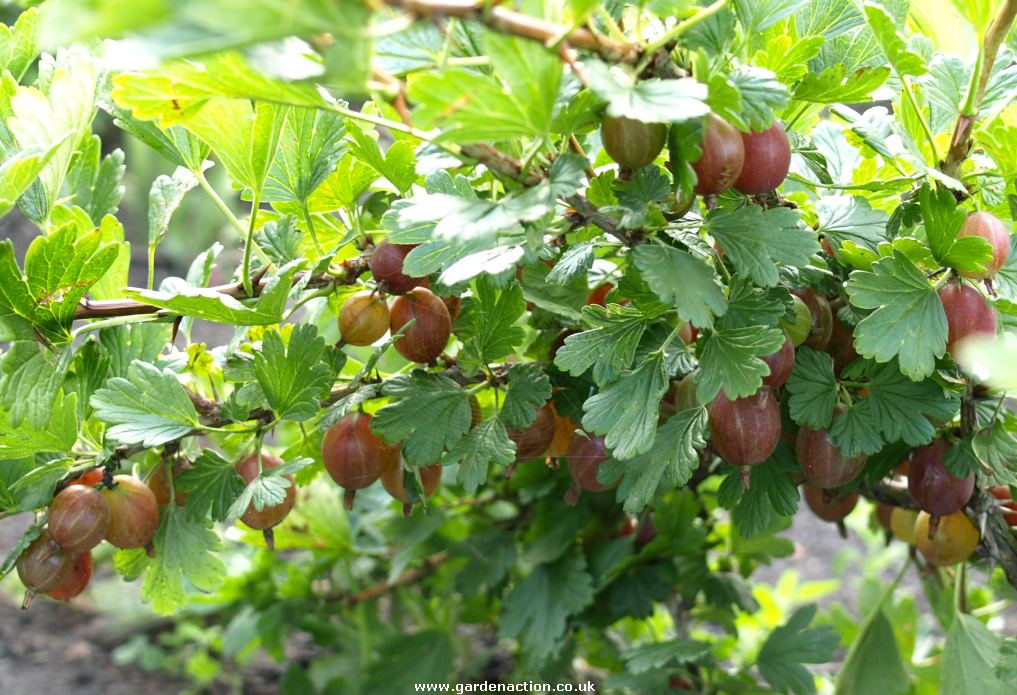 The principals are the same as described above but you will need a support system in place before you plant unless they are being grown against a wall or fence. If you are planting only one or two cordons then a stout bamboo cane for each stem will be satisfactory but more than that and it would be better to erect a simple post/wire system with two 1 x 1” posts of about 48” in length buried in the ground with 2 straining wires at 24” and 36” on which to tie the stems. Remember a single cordon will have one stem and a double cordon will have two stems.
Cordon Gooseberies again can be planted in pots during the Summer months or as bare rooted during Autumn and Winter until April.

Will definitely need a fairly hefty stake driven into the ground before planting as they do need support as the head can get quite top heavy. Otherwise planting and soil preparation is the same. Sometimes the area where the bush was grafted may need protection from severe frost so wrap the union with some thermal material over winter. It is more frost prone because it is raised up in the air.