Potash is a good additive for continued good crops on your gooseberry bushes. It should be applied late February or early March at a rate of ¾ oz per square yard. It can be augmented by Growmore applied at 2oz’s per square yard. Rake the fertilizer into the soil in the area immediately surrounding the base of the bush. If the soil seems dry water it in gently.
A mulch can be applied after feeding if necessary. The actions of worms, wind and rain may have recduced the original mulch you added at planting time so top it up using the same materials. This is especially important on thin or light soils. It continues to help reduce the need for additional watering, protects the bushes during times of drought, and reduces weed infestation.
Additional irrigation is beneficial, especially during times of drought but avoid excesses or on-off watering especially at fruiting time because this can lead to fruit bursting. Be regular about your watering regime and stick to it. 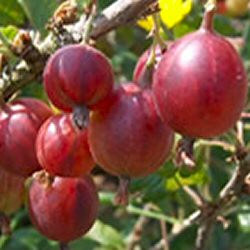 There are two serious problems with Gooseberry – Mildew and Gooseberry Sawfly.
Mildew can be quite debilitating, especially on older varieties which will almost certainly get it unless you take preventative measures. This involves spraying with a suitable broad spectrum fungicide. I can’t make recommendations because so many have been withdrawn but your local stockist can advise on avialbility for the treatment of mildew. The main thing is to start early, just as the leaves are opening. If you leave it any later then probably the bushes will already be affected. It is is difficult to clear up once it gets a hold and you can keep spraying through the season but you can’t magic away mildew that is already there, but hopefully the new growths will come clean.
Severe infestations defoliate bushes and ruin crops.
Good cultural practices help – always prune for an open centred bush; this improves air circulation and thus reduces the effects and severity of the disease. And if you grow newer varieties that have mildew resistance then the problem will be much alleviated. Even the so-called mildew free varieties can still sometimes get a touch of mildew if it’s a wet season but they are much less severely affected and usually shrug it off. Goode mildew resistant varieties of Gooseberry include Invicta [the most resistant strain available] Jubilee, the Hino prefix varieties, and Greenfinch.

This loopy speckled green caterpillar appears so suddenly and is so voracious it will defoliate bushes overnight before you even new it was there. When you shake the bush they all drop off onto the floor but soon climb back up again. They are quite easily dealt with and the commonly available insecticide Provado will kill them almost immediately. So be on guard in May and June which is when the larvae are in season and have some provado ready to hand if need be. Bushes that have been stripped of their foliage will shoot again quite quickly but it does set them back. 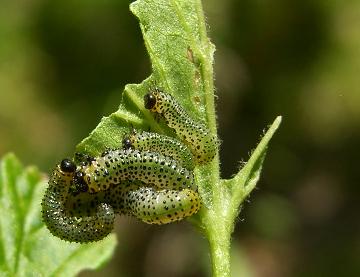 This hybrid Gooseberry is treated in exactly the same way as usual Gooseberries. It is a hybrid Gooseberry crossed with a Blackcurrant but in habit, appearance and growth it resembles a Gooseberry. It tends to have less thorns and the fruits are quite small but very profuse. It is a vigorous grower so may require more pruning but it has useful mildew resistance and is an enjoyable and unusual variation on the Gooseberry to grow.

By no means a new invention, the first largely spine free variety came out in the 1970’s and was called Captivator and is still available today. I say largely spine free because even so called thornless varieties do still have occasional thorns so look out, but harvesting is definitely a lot more painless than with traditional Gooseberry bushes! There remains a limited pool of varieties, Pax came out in a fanfare and had good quality fruit and mildew resistance but has not proven sufficiently hardy in colder winters, it can suffer from die back. Xenia and Freedonia are two newer ones that have arrived that look promising. I wouldn’t say so far the thornfree Gooseberry can give the same quality or quantity of fruits as normal varieties but they are well worth investigating if you really do hate those thorns. Cultivation is just the same and all the usual growing methods apply.

There remains a small but thriving community who like to exhibit Gooseberries at local shows, and maybe you would like to join them. There isn’t as much mystique involved as you might imagine; best-practice techniques in cultivation applies and variety selection is important; this is where some of the older varieties really come in with types like Green Gem, Crown Bob, Whinhams Industry and Gunner becoming show standards that frequently win on the show bench.
One of the main things to remember is that thinning the fruits soon after blossom set will result in top quality larger berries which is important. Reducing the yield by about 50% still gives you plenty of fruit to select from come show-day but will also have the effect of increasing size and quality significantly. To obtain the maximum size fruits regular watering is essential following fruit set, as is good disease management to keep those berries sparklingly clean and blemish free. Make sure the bush isn’t overcrowded with growth because stray branches can rub on the berries and mark them, which makes them useless for showing.
Remember size isn’t everything, although it does count significantly at judging time a display of consistent berries of the same size can win over larger examples that may not be so consistent or perfect.
So why not think about showing your Gooseberries? A feather in your horticultural cap next Summer maybe, and you’ll still have lots of delicious berries left over to enjoy afterward too!