The Gooseberry is probably the most versatile of all the soft fruit bushes as it can be grown as a cordon, fan, standard or a traditional bush. That makes it ideal for everyone as it can be incorporated into almost any area with a little forethought.
Gooseberries originate from Northern Europe so with little exception they are very hardy and can be relied upon to produce pounds of fruit even in colder areas. That’s a good pay off for putting up with those fearsome thorns! Gooseberries are also little troubled by bird predation so they don’t have to be netted or consigned to the fruit cage.

Pruning gooseberries is a lot less hands-on that it is with blackcurrants or raspberries, as the bushes are allowed to maintain a permanent framework so there is less work or knowledge involved. This and their inherent hardiness makes them easy to grow and ideal for beginners. They are also able to put up with a bit less sunshine than most fruiting plants.
A good producing gooseberry plantation is a valuable asset to the gardener and home cook as the fruits are readily frozen or cooked and made into jams etc. Being seldom available to buy in stores, it makes sense to grow your own so you have a plentiful supply for gooseberry pies and crumbles or gooseberry fools!

When one imagines gooseberries they are almost always green but those with more experience will tell you that this is just one colour that the fruits come in! Green remains the most commonly encountered type and these remain first class for cooking purposes. But you can also grow decadent red ones, lovely yellow ones, varieties that are almost white in colour and some that ripen to almost black. Most of these colour variations are sweeter and can be used for dessert but they also cook well. Why not grow a variety of different types and colours? Especially if you choose to grow them as cordon-trained which is one of the simplest growing methods of all and you only need 18” each for a cordon Gooseberry.

The Gooseberry generally prefers a well drained site and doesn’t like poorly aerated and soils that are too heavy or waterlogged. One variety is the exception and the red Whinhams Industry can tolerate clay soil but in the main it’s best to choose a spot that avoids these conditions, or to improve the soil as much as possible before planting with sharp sand, organic rich matter, or grit. Aside from that ph isn’t too important and whilst some sun is definitely beneficial – especially for the dessert kinds – part shade is accepted and seems to have little effect on the crop but under these circumstances it’s better to stick to the green varieties as they require less sun to ripen.
So, easy to grow and undemanding, quite ordinary soil is fine.

The many ways to grow Gooseberries

A traditional bush no doubt you will be familiar with. This is the heaviest cropping method and sometimes the bushes will be supplied on a short leg but more often they will be base-branched. These bushes grow to about 5’ in height and you will need to allow a little more than that between bushes.

A cordon Gooseberry is a very space saving option for smaller gardens, it can be grown with a support system in the open, or you can plant against a fence or wall – any aspect is suitable. You can grow single cordons – which only have one main stem – or double cordons which have 2 stems in the shape of a ‘V Pruning is easy, just keep the side laterals pinched back and allow the one or two main stems to grow until you need to check the growth. This is usually kept to between 3.5’ or 4’ in height but they can grow considerably taller than that if you let them. Obviously the more growth they are allowed to produce then the higher the yield will be. The fruits on cordons ripen really well because they get more sunshine and it easier to keep mildew at bay too because air circulation is better.

This used to be a very specialised method of cultivation that you would see very seldom but it seems to be accelerating in popularity because it is seen as a space saving option by way of elevating the bush onto a standard stem that can be planted beneath with strawberries or herby. Such a feature is similar in stature to a standard rose and is an attractive formal feature that can either be grown in the open ground, or in a large container. It should be staked wherever it is grown because the head can get top heavy. Generally this type of gooseberry is grown on a stem of around 1 metre in length, the stem itself should be kept clear and any growth rubbed off as soon as it appears because this would be growth from the rootstock which you don’t want. The head of the bush itself should be treated just like a normal gooseberry bush as regards pruning. All kinds of Gooseberry can be grown as standard but nurseries often only keep one or two kinds in this form as they are quite labour intensive to produce to a saleable standard so you may need to go to a specialist supplier. 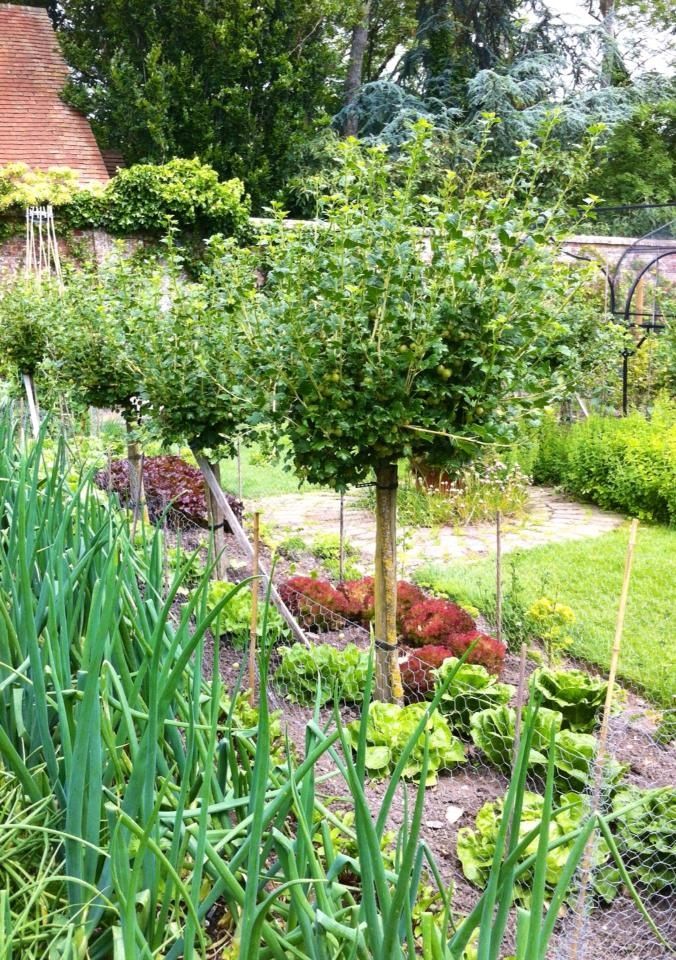 It is also possible to fan-train your Gooseberry against a suitable wall. You will need an area 5-6’ in height and width. This can be quite a feature and they crop well and harvesting is quite easy too. All varieties and types are suitable. A good way of growing a Gooseberry into a fan is to buy a double cordon and pull the two laterals down so they are nearly horizontal – this is usually possible because on young cordons the growth is still quite pliable and flexible. From these two horizontals a number of upright shoots will develop and these can then form the basis of your fan.