Pruning Damsons is the same as for plums and gages, as follows and will depend on the form of tree you are growing.

This is by far the best trained form for plums and cherries if you require your tree to remain an easily manageable size. Plums can even be grown in a fruit cage using this method and all trees are easily netted from birds, which is very important with cherries. After planting the tree it can be left until the Spring and as growth starts the main stem should be cut back to 4 feet from ground level. This may have been done at the nursery before despatch. During the Summer, usually in late July, all of the new side branches should be shortened to about 8 inches, pruning to a downward pointing bud, the leader (main stem) should be left un-pruned. If the side shoots appear too close together, remove some completely to leave a well shaped tree. All shoots below 18 inches from the ground should be completely cut off. 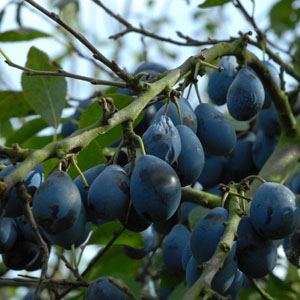 Following Spring & future seasons As growth starts in the Spring, the leader should be cut back by about half to two thirds of the new growth, pruning to a bud the opposite side to the previous year’s pruning. In future years when the tree has reached the required height of 8-9 ft the leader should be cut back in May to control at this height. In Summer each year all of the current season’s growth of each branch should be shortened to about 8 leaves, all laterals growing from these branches should be pruned to 6 leaves, any vigorous shoots near the top of the tree should be cut out.
Your tree is now maintained in an easy to manage heavy cropping form

Start with a young year old tree and immediately remove the top third of the growth. If it is feathered [i.e. has side laterals] prune just above two conveniently placed branches; these will form the basis of your fan. Normally this is about 18” from the ground but it will depend on the positioning of 2 good feathers [branches] which you can use. It can also be varied to your own preferences and there are not hard and fast rules as to where the first branches should be – sometimes a fan will be grown with a short leg and other times it may be branched quite close to the ground. If your trees is an unfeathered maiden and does not yet have side shoots then prune to just above 2 good opposite buds and these will form your first laterals from which to work.
The first Spring shorten these two laterals to about 10-12”. You will now have a tree that looks a bit like a stumpy capital ‘T’ but don’t worry. This is a good basis from which your fan will develop. These two shortened side laterals will now produce several new upwardly mobile leaders during the course of the growing season. Leave them be until the next Spring and then stand back and survey your tree. Most of the work will now have been done but you will need to remove any new growths that are heading towards the wall or fence and any that are crossing or too congested. Having done this you should now have a nicely balanced tree – confratulations, your fan shaped tree has been trained!
Later that summer, and in subsequent summers, you can shorten again a selection of less importasnt laterals and you can also trim the top most growths so that the tree stays within the boundaries of your wall or fence. Finally, in Autumn of the same year trim again the laterals that you shortened earlier in the summer, to about 3 pairs of leaves. You will find fruit buds will form on these shortened branches to carry next years crop.

Is the easiest growing method to prune. Pruning takes place in the second half of the summer and is simply a matter of trimming back all of the side growths to about 3”. Established trees only need to be pruned once a year but young trees show more vigour and you may need to go over them again in late Autumn. In subsequent years the practice is continued late each summer. Flower buds form on the base of the previous years growth. The leader can be shortened once a year, at the same time, if desired and to keep it within an acceptable height. This promotes better branching lower down and a new leader will form from a bud just below where you cut.
If you tree has any bald patches along the trunk, which can happen especially lower down, you can encourage dormant buds to shoot by nicking the bark with a sharp knife just above the bud. This often encourages them to shoot.

Although you will have fed the trees initially to get them going by applying fertilizer when you planted the trees, this will last only a short time. You will need to re-apply annually to get the best results from your trees. The type of feed you are giving will change slightly now as their requirements will be slightly different.
For the first year or two following planting I recommend a nitrogen based fertilizer. Nitrogen encourages growth, not fruit, and that’s what you want during the formative years, as you want the tree to concentrate on building a strong framework for it’s fruiting years that follow. Feed nitrogen in early Spring, applied when the ground is damp or wet, at a rate of 2oz’s per square yard. It should be spread around the base of the tree. After this period, from year three, switch to a more general purpose fertilizer such as growmore or bonemeal, spread over the rooted area at two or three oz’s per square yeard, applied in late winter or early spring.
Irrigation is important for the health of the tree during the first year or two to continue establishment. But it is not so important afterwards so unless the tree is showing stress during prolonged dry periods it should not be necessary to give extra water.

This is not really practiced for Damsons because the fruit doesn’t get that big anyway, seldom as big as a dessert plum so the benefits of thinning Damsons are fairly osbsolete unless your tree is prone to biennial cropping in which case thinning the fruit by a quarter soon after fruit set can offset this tendency.

Bugs and diseases of Plum trees

The Damson often seems hardier and less prone to disease than plums, but under certain circumstances the tree can succumb to any of the maladies that account for Plums.
Aphids and Whitefly
Are the commonest problem you might encounter. They can quickly infest soft new growths causing them to distort and to stop growing. Most insecticides will be effective, Provado is the recommended name; it is systemic which means although it kills on contact it also works from within the plant tissue, and can remain effective for up to 6 weeks before it is necessary to re-apply. Soapy water can be effective on smaller colonies.

Varieties to choose from 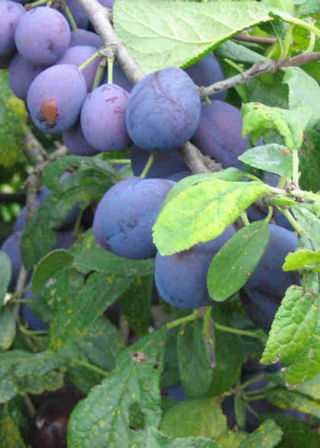 There is quite a limited range of Damsons and to be honest not a lot of breeding work has been carried out; Blue Violet is one of the very few to have come through recently. This new variety is typified by largeish beautiful blue skinned fruits, the flesh is sweeter than most Damsons and can be eaten fresh but of course is also ideal for all culinary purposes. Semi-compact in growth, self fertile. Likely a Damson-Plum hybrid.
Shropshire ‘Prune’ Damson
This is our most popular variety has it has the deep and powerful true taste of a real Damson. Definitely only for cooking, it makes superb jams and pies. The fruit is small, ripening to a deep purple-blue, almost black with a golden flesh. The tree is fairly compact, dense and twiggy with lots of short side spurs. A very hardy grower and a prolific cropper. Self fertile.
Farleigh Damson
Dense and compact, almost congested growth; needs careful pruning. Good flavour, fruit is medium blue-purple. Does well in Northern area’s, partly self fertile but the best crops will be attained with a pollinator.
Merryeather
For centuries a famous name in Damsons. The fruits are larger then the Shropshire Damson and milder in taste – good for cooking purposes but some can eat them fresh as well. Self fertile and a good ‘doer’ growth tend to me more vigorous than most.
King of the Damsons Large, dark purple black fruits, rich and juicy golden flesh. Hardy and vigorous grower. Not often grown but good, the blossom is self fertile.

These fruit trees can perform very well in a container, if anything being even more satisfactory than the Plum. This is partly down to their naturally compact habit – they seldom show as much vigour as young Plum trees. Provided the Pixy rootstock is chosen then the trees will perform well in a standard 24” container using a loam based compost, the preferred choice of trees for pot.
The trees can be set in the container during the winter months from bare rooted stock, or the summer as long as the tree acquired is already in a pot, it can be transferred then to your larger one.
Additional feeding on an annual basis should consist of maxicrop seaweed feed, applied as a foliar feed or in granulated form. Customers have reported good results from Miracle grow.
The trees can remain in the container for 5-7 years after which time they must be re-potted. You can increase the size of the container by 4-6” or get a good half barrel at this point; alternatively, you can undertake judicious root pruning, by this time the rootball will be fairly congested so it can be ‘shaved off’ with a sharp knife or you can loosen it and shake off some of the old compost. It can then go back in the original pot, with new compost around the roots. This method should only be undertaken during the winter months when the tree is dormant.
Trees in containers require regular and reliable watering and Damsons are no exception. Twice a day may be necessary when it is hot, once a day should be adequate at other times and especially in the Spring and Autumn when night time temperatures are cooler and the moisture does not evaporate so readily and the trees’ requirements are less anyway.
All varieties will be suitable for container growing as long as the Pixy rootstock is chosen, and you can grow them as bush or column type trees. The more vigorous St Julien stock can make a satisfactory container specimen, with judicious pruning, in a large half barrel or similar, if a larger tree is required but Pixy should normally be the preferred choice.