If there were a popularity poll for soft fruits then the Blueberry bush would undoubtedly win hands down! No other fruiting plant has increased so markedly in popularity during the last 10 years. With a virtues list so long and tempting it was almost inevitable that it would catch on in such a big way in British gardens, especially as it has been extraordinarily popular over much of the USA for many years.
Part of it’s suitability in todays modern gardens lies with two invaluable traits; it is a very pretty shrub at home mingled in with other shubs and plants, and secondly it’s willingness to crop well in containers. Although the Blueberry has specific soil requirements, this can be negated by growing in pots and containers where the ideal soil can easily be provided.

The best soil for blueberries 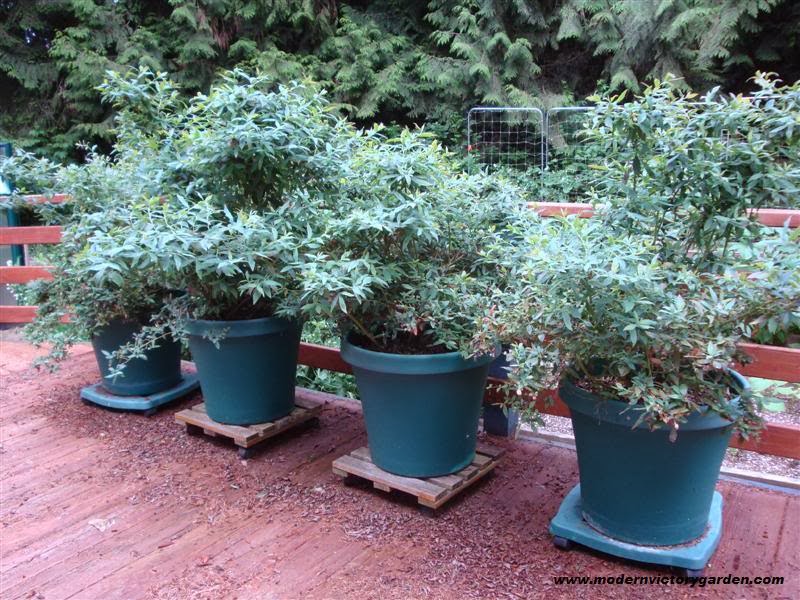 Very definitely these fruiting shrubs do not like any lime in the soil. They can therefore be described as ericaceous lime-haters in the manner of rhododendrons, azaleas and some heathers. They require a peat enriched soil with a ph of ideally between 4.0 and 5.5 Beyond that requirement they are fairly tolerant and sandy or heavier soils are both accepted. But wherever you plant them, give a good bucketful of plain peat. One good way of establishing whether your soil is good for these shrubs is the presence of rhododendrons or other similar classic lime-hating plants. If these subjects already grow well nearby then the Blueberry too should thrive. But to be absolutely certain then buy a ph soul testing kit. They are readily avail able from garden centres, are not expensive and will give a very accurate reading of your soils ph.
Soils with a much higher ph reading may not grow Blueberries satisfactorily even with the addition of lots of peat for there will always be the likelihood of lime leaching into the soil somewhere down the line. In these conditions it is best to grow the bushes in containers, or if you prefer you can plant them in a container and then sink the whole into the ground.
As far as siting is concerned, full sun is preferred but partial shade will still give good results as long as it isn’t too dry. These subjects like plenty of water during the growing season and do well in wetter climate

An oft asked question as anything not the norm is mistakenly assumed to be tricky or tender. The Blueberry is emphatically hardy. It is grown commercially in Poland and North America, both of which have climates far harsher than our own. So even if you garden in Scotland you shouldn’t have any problems with frost. The flowers don’t appear until May so unless you are plagued consistently by late frosts then the blossoms shouldn’t get caught during a normal year.

How big do Blueberries grow?

The typical high bush blueberry is relatively slow in growth but quite quick to come into bearing. It will crop the year following planting quite regularly, as a 2 or 3 year old bush. Only a smattering maybe, but enough to taste and crops increase readily and steadily year after year. When it is fully grown you can expect an average Blueberry to reach about 5’ and the spread is roughly the same. A planting distance of 6’ between bushes is therefore appropriate. Specimens in containers won’t reach there full potential as far as growth is concerned and will stay smaller than that, a size reduction of around 30% is normal for bushes grown in pots and containers, making them very convenient to manage and harvest.
Most Blueberry varieties fall into the Highbush section and this is further divided into Northern Highbush and Southern Highbush. The latter are sometimes regarded as being a little more tender and less-hardy but trials have shown they can cope with most if not all parts of the UK climate just the same. All of the varieties in our recommendations list towards the end of this article are Northern Highbush.
Lowbush Blueberries are much smaller, but the fruit is not so good and they are seldom cultivated in the UK. Most hybrid varieties sold here are derived from the High Bush Blueberry. There are one or two exceptions,Sunshine Blue being one. This is a compact little shrub of less than half that height and spread when grown. Top Hat is also known to be fairly compact.

The Blueberry is not entirely self compatible and it is almost always recommended that pairs of different varieties are planted together to ensure the best crops. Sometimes you will find varieties sold as being self fertile but this isn’t really true. There is really only one that experts regard as being self-fertile and that is Sunshine Blue. Most other types will provide a few berries even when planted on their own but no variety of Blueberry can truly be described as self fertile and to achieve the best crops you should be prepared to plant at least 2 – different – varieties. As the flowering season for these fruits is fairly concentrated, nearly any pairing will match up satisfactorily and achieve abundant crops.
A plentiful supply of bees is required for good pollination. The encourage these beneficial insects with the presence of nectar rich flowers nearby is a very worthwhile practice. 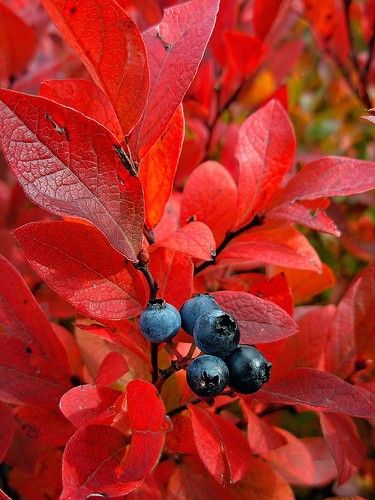 It is very appropriate to incorporate them into the mixed border or shrubbery, or to have them on the patio. The bell shaped flowers, opening in May, are oyster-white, sometimes with a pink tinge and appear in clusters. They remind me of lily-of-the-valley. But the real merit lies in the stunning autumn leaf shades which rival that of any other shrub or tree that I know. Reliably produced, the brilliant colours of orange gold and near pink intensify to a gleaming dark ruby red in October and November. A sight not to be missed. A small number of newer varieties have been bred not only for their good fruit, but with ornamentation in mind as well. Look for ‘Misty’ with it’s distinctive blue-toned leaves, and the very small Sunshine Blue which has beautiful pink flowers.

Whilst it is possible to get seed of the original wild Blueberry Vaccinium corymbosum, trying to grow productive plants from seed is a fools game. The seed is miniscule, like dust, germination is slow and erratic [it will need exposure to cold temperatures consistantly for several weeks before germination takes place] When the seedlings do eventually appear theyare extremely small and difficult to handle, and prone to damping off. Eventually, if you do manage to get some plants to fruiting age you will find the results are very variable and won't match up to the better named varieties. So have a go if you want a bit of fun and a challenge, but really, for good productive bushes, there is no substitue for good, well named varieties purchased as plants!