Try not to be impatient and pick your fruits too soon. They should be a fine glossy black to be judged properly ripe, not purple. Pick too soon and the fruits may lack juice and be tarter than they would otherwise be. You will need to go over the plants several times as not all the fruit will ripen at once. For the best results use straight away, freeze them or make jam as quickly s possible to capture the best flavour.
Blackberries usually begin ripening in late July; that is the earliest varieties such as Helen. The main Blackberry season is throughout August and this applies to a lot of the most popular varieties. Late season for Blackberries is September and the variety Chester is the predominant type in that class. So by growing a carefully selected range of varieties you can have fresh blackberries from late July until well into September. 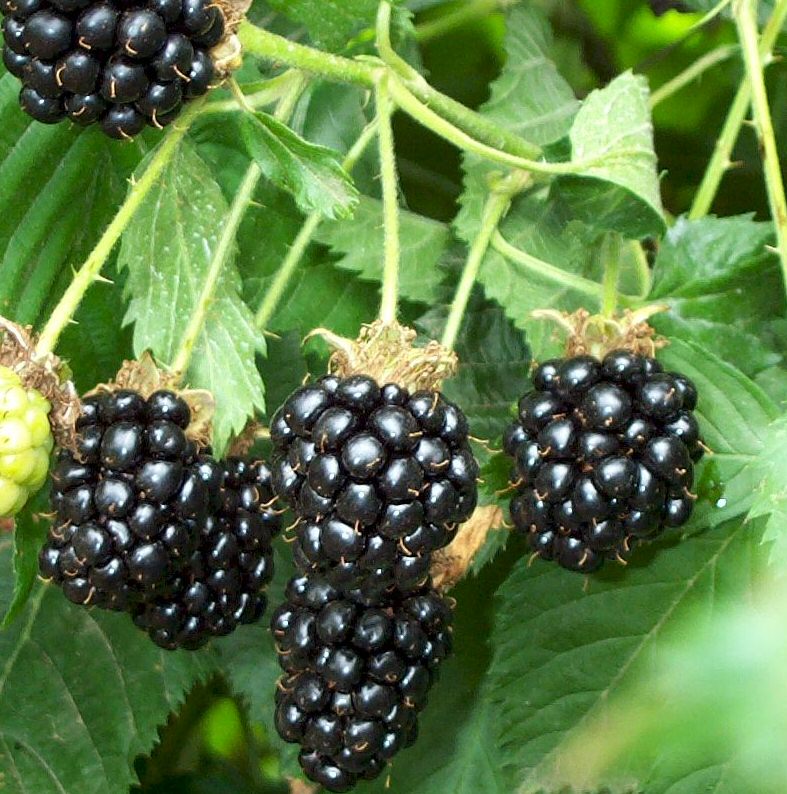 You will not doubt already have your own pre-concieved ideas as to whether you are willing to tolerate thorns on your brambles or not. If you were used to brambling along the hedgerows as a child it is more likely you won’t mind a few prickles. Others like to be safe in the knowledge that they won’t get savaged whilst picking a punnet of Blackberries for tea! It is unlikely that anything I can say will influence your stance on this one way or the other. Asked which is best, well the answer really comes down to flavour.
There is a long-held belief that thorny types have a better flavour than the thorn free ones and that I have to agree with. Which isn’t to offend the many smooth and shiny varieties as a lot of them do have a perfectly good flavour that will not disappoint you. But if flavour is your top priority then I have to say that subtle aromatic sweetness derived from the best wild brambles is not to be found amongst the thorn free clones. For that you really need to select a thorny variety like Ashton Cross, or Kotata. It would seem they share a closer alignment with their wild bramble heritage and thus that ‘real’ bramble taste as well.
As to yield, well the thorny ones did have the edge with a more prolific crop but the best new thorn free strains can compete in that area nowadays.
There are certain circumstances aside from personal preference where a thornless variety is to be preferred. If it’s by a path or walkway or you have small children then you probably won’t want a fearsome beast tearing at flesh and clothes. And if you want your blackberry to double as a barrier or to fill in a gap in a hedge for example, there isn’t much point in planting a demurely innocent variety with stems as smooth as sheer silk stockings.

Blackberries are not troubled very greatly by maladies but they can, to a lesser extent, get most of the diseases that Raspberries get, because they are in a closely allied family.
By purchasing your Blackberries from a specialist fruit grower with a good record of disease and plant husbandry your plants will get off to the best possible start and you will find you are likely to be less troubled by disease and problems.
Here is a resume of the main Rubus diseases and problems that Blackberries might suffer from:
APHIDS aka Greenfly will cause distorted and curled new leaf growths. Light infestations may not cause too much of a problem but heavier infestations weaken the canes and compromise cropping production. Either scenario should not be tolerated because greenfly spread viruses and other diseases so it’s a good idea to eradicate them. Soapy water can be used on small colonies and modest planting area’s, otherwise opt for a good insecticide.
VIRUSES Can be identified by stunted canes and leaves which are mottled or streaked, usually yellow. Unfortunately there is no cure so all canes should be dug up and burnt. Replanting should occur as far away as possible to prevent the disease spreading to them. If this is not possible and you have to re-plant in the same spot then remove the soil to 2 spits depth replacing it with uninfected soil. You can, as an alternative treat the existing soil with jeyes fluid [as per instructions for soil sterilization on the back of the can] but you will then need to leave the area fallow for 6 months preferably before planting the new canes. Some varieties are less prone to virus than others, but there are none that can truly be described as virus resistant.
Virus is relatively uncommon and some deficiencies can give similar symptoms so check first or apply fertilizer rich in magnesium and trace elements before assuming the worst.
CANE BLIGHT is identified by the withering of the new canes as they appear in spring; purple blotches can be seen on shoots and stems. Infected canes should be dug out and destroyed, and remaining growth sprayed with benomyl or a good currently available alternative.
RASPBERRY BEETLE Is the culprit when you have grubs in the fruits themselves. It is quite easily eradicated on a season-by-season basis but timing is crucial. A good systemic insecticide will work but it should be applied at fruit set, and again just as the first berries begin to show some colour.
In all cases of insect infestation Provado is our recommendation. It is readily available from stores and online and it is systemic. This means that whilst it does kill on contact, it is also absorbed by the plant so it works from within, ensuring protection for up to 6 weeks.   BLACKBERRY RUST Is not a common problem with Blackberries but can occur on congested growth or during wet summers. It is best controlled by using a copper based compost, drench the foliage as fas as possible. Particularly badly affected growths can be cut away completely or defoliated. Blackberry rust is identified by orange pustules and spores beneath the leaves. It can also be found on Raspberries and related 'Rubus' species.

Brown spots on the Leaves

Leaf spot [sometimes known as Septoria] can be found on young growths, especially that close to the ground, because the spores are spread by water droplets splashing from the soil. Good cultural practices, such as adequate feeding to encourage general vigour of the growths, and keeping the area clear around the plants, helps. More established Blackberries and stronger, taller canes are often unnaffected, The disease can be controlled with a regular application of a broad-spectrum fungicide applied during the growing season.

It can sometimes be difficult to identify the culprit and often there doesn’t seem to be any insects present. Capsid bugs are the most likely cause but other insects or beetles can also be to blame. The best thing is to get a systemic insecticide which will work from within the plant, so you are not relying on contact killing the insects. That way when the villains make an appearance from wherever they are hiding they will be killed when they decide to next have a meal on your blackberries. If harvest time approaches check the instructions for clearance time which will tell you how long you have to leave it before you can eat the fruits.

Your Blackberry plants should yield well for up to 15 years or more. Plantations of that age or greater showing deterioration in yield or fruit quality should be replaced with new stock. It is inadvisable to re-plant in the same area and a fresh spot should be sought wherever possible. If this is impractical – if you have a small garden or have them planted ina fruit cage for example – then dig our as much of the soil as possible in the planting hole and replace it with good fresh fertilized soil. If you feel your blackberries have had a disease and you have to plant again the same area then it would be necessary to sterilize the soil with Jeyes fluid as instructed by the manufacturer. This should be done well in advance of planting as you will need to leave the ground fallow for 6 months before planting.
So that’s it – all you need to know about growing Blackberries. Hopefully after reading this you will venture forth, shovel [or trowel] in hand and within a couple of years be harvesting you own lovely plum and juicy berries!