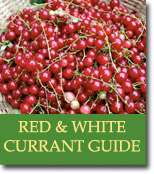 As well as growing your cordon red currant and cordon white currant as traditional Redcurrant bushes, you might like to consider growing them as cordons. With a planting distance of just 18", compared to 4' for a bush, they are much more space economical and if grown against a wall, they are easier to net against birds too. Pruning is simple and whilst crops inevitably do not compare to a full grown bush, they are still very productive, especially considering the space they take up.

Our red and white currants are also available as standards grown on a 3.5' leg. Much easier to harvest.

Time to The First Crop of Redcurrant

Redcurrant can yield in the first season.

Red and whitecurrants do not need the hard pruning that is recommended for Blackcurants and a framework of growth is left in place. Initially the leaders [main stems] can be shortened by up to one third to any outwardly facing bud. This has the effect of keeping the centre of the bush more open which makes the foliage less prone to disease and also makes harvesting easier. You will find the fruiting trusses in the centre of the bush will ripen more readily, and will be sweeter as a result of this type of pruning. This pruning should be done soon after planting. The following winter leading branches of the Redcurrant can further be shortened to encourage side[fruit bearing] laterals. At this stage any unwanted low branches can also be removed at their base.

By the third year you should have a well shaped and nicely branched bush. From now on the only attention is to continually shorten longer/main branches and remove any that are causing congestion, diseased, or broken. 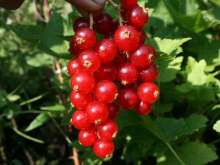 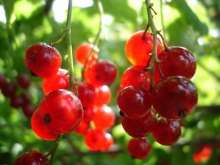 An outstanding new variety which is unique as the first to be released from an entirely new breeding programme involving a previously unused parent. This species, Ribes Longeracemosum, has contributed Redpolls enormously long fruiting strings...

A new variety of redcurrant from East Malling Research Station, quite a breakthrough in research as Redstart is the first variety raised in this country for more years than we care to remember! Redstart was,...

One of the first to ripen, providing a very large crop of large, bright fruits, sweet and juicy, makes a large bush, sometimes too large on the better soils. Best grown as a cordon.... 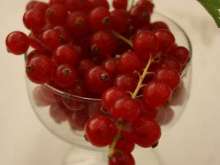 A new heavy yielding mid season variety from Europe which we introduced to selected customers only last season. Initial reports are already very encouraging and we feel this variety deserves general release. Rednose forms a...

A Dutch variety with a good flavour. In our trials, Rovada has produced exceptionally heavy crops in late July, early August. This variety could prove to he the heaviest cropping of all varieties....